Sophie Grimaldi (founder of The Clabile Trust) and Alan Ramos successfully ran the 2021 London Marathon raising £2795 for The Clabile Trust. Congratulations!! A huge thank you to everyone who supported them. These funds will go towards the education of students in the Waterberg, Limpopo South Africa.

The annual fixture in the Clabile diary, the Quiz night, has become something of an institution ...

At this year’s event, Norfolk ‘n’ Chance seemed to be running away with it at the half way point but the other teams then gave them a run for their money and they ended up winning by just three points.

As well has being a fun evening, we are delighted to have raised about £700. Thanks so much to everyone who came for your support and generosity and to Cloudberry for providing a fabulous raffle prize.

Finally, a big thank you to Simon Brookman for, again, organising all our printing! 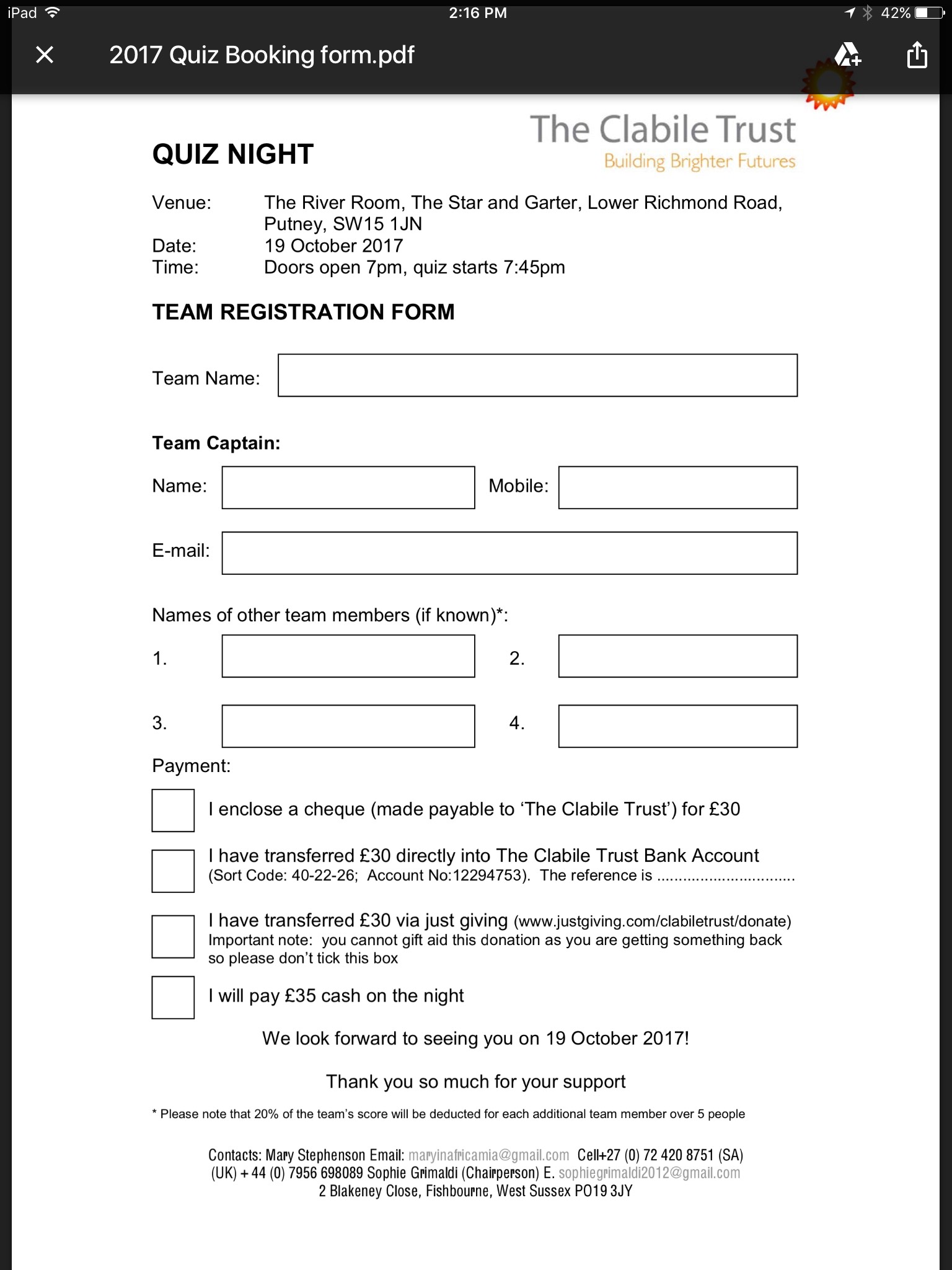 For six consecutive years Clabile Trust supporters have been taking to the streets of London to raise money and support our cause. The British 10k London involves over 20,000 runners and is the largest 10k running race in the U.K.  It is an amazing event, which takes runners past London’s most famous landmarks, including Piccadilly Circus, the London Eye, Tate Modern and Pall Mall.

Over the years, we have had over 25 runners take part. For some, taking part was an incentive to start running and the 10k was no mean feat. For others, current personal best records were to be broken. Whatever the reason, The Clabile Trust is tremendously grateful to all those who have taken part over the last six years. Between them, they have raised over £3000.

We were delighted to have Andrew Broadbent run the London Marathon on Sunday 22nd April 2012 to raise money for us.

After months of gruelling training, pounding the streets in the rain and darkness of winter, Andrew was ready to face the 26.2 miles. Adorning his personalised Clabile Trust running shirt, the start line was in sight and he was in good spirits feeling confident about the race and pleased the sun was shining.
With the atmosphere, cheering crowd and his i-pod to keep him going he ran the first 13 miles almost effortlessly... his words not ours! At 16 miles, his legs were getting heavy but, maintaining his pace and with an energy gel to get him through the next few miles, he kept going.

In the last few miles the physical strain was kicking in and at 25 miles he got cramp. With only the last mile to go and a final mental push, Andrew completed the Marathon in a phenomenal 3 hours 30 minutes and 6 seconds.

As he crossed the line his words were, “That was [bleep] agony” and what did he want to do next? “Have an ice bath, a Guinness, lots of food, followed by bed!”
We are very proud of Andrew’s achievement and grateful of the money he has raised which will support The Clabile Trust in its work.
Not only did Andrew complete the race in a truly amazing time, but he managed to create a 4 minute video of his journey at the same time!  To view, go to youtube.com and type in 'broadieful marathon 2012'.

Jodie Whittaker, our patron, ran the London marathon for Mencap and matched the amount she raised with a donation of her own of £2,000 to The Clabile Trust.
This is what Jodie had to say about fundraising for two charities close to her heart ...

“Last year, my sister in-law Katie asked if I'd run the 2012 London Marathon with her to raise money for Mencap and The Downs Syndrome Association as my nephew was born with Downs Syndrome last February. I jumped at the chance not only to run for Mencap but also it gave me the opportunity to support The Clabile Trust by matching the amount raised. I am such a huge fan of all the amazing work Sophie and The Clabile Trust do. It is a pleasure and honour to be able to contribute in this way x”.

Thank you Jodie for all your support.

We ‘Beat the Blues’

January 29th 2011!!  What a night!!  We really did ‘Beat the Blues’ with a fabulous action-packed evening at this, The Clabile Trust’s biggest fundraising event.

Guests arrived at the elegant Tithe Barn to be greeted with a glass of bubbly and music from the talented ‘Cash Cows’ Band.  The entertainment continued during reception and dinner as we were all mystified by the magic of Pip Kennedy.  Following dinner the amazing voices of Merryn, Peter and Andrew entered into the party atmosphere with a selection of popular operatic arias.  Dancing followed with music and stunning a light show provided by local DJ, Ross Winhall.

The quantity and quality of the prizes on offer ensured that a large number of guests, who generously dug deep into their pockets, later left the Tithe Barn with some outstanding prizes.

Archers actor and local GP, Graham Blockey, performed the role of MC and auctioneer, whilst our patron, actress Jodie Whittaker, told guests how proud she was to be involved with a charity in which every penny gets directly to the people who really need it.

The Clabile Trust would like to thank everyone who joined us for the evening, the organising committee (Pauline, Angie, Cindy & Gillie), the performers and those who generously donated prizes for the evening.

Thanks to our guests and supporters we raised over £8,500 during the evening.

The Clabile Trust is run exclusively by volunteers, keeping administration costs to a minimum, thus ensuring that money goes directly to where it's needed.

In Namibia, fewer than one in five bushman children attend primary school.